“My Dear Mr. Stalin is a fascinating historical collection of letters between the two most powerful men on earth—hence this is both highly important and vibrantly human. The result is a captivating book that will be obligatory for all scholars of the Grand Alliance and those interested in how the World War was won.”
---Simon Sebag Montefiore, author of Potemkin: Catherine the Great’s Imperial Partner and Stalin: The Court of the Red Tsar

“This is a very important book of source and reference material which ought to stay in print for many years, and of enduring interest not only for scholarship about Stalin, but perhaps even more about Roosevelt.”
---Historian John Lukacs 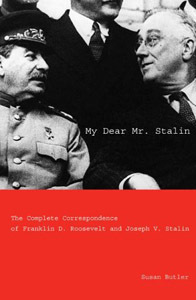 THE FORGOTTEN LETTERS OF WAR

Only a discerning writer would have the instinct to recognize the remarkable historic value of an incomplete collection of messages in a forgotten foreign publication in the one of the nation’s presidential libraries. And Susan Butler did just that.

This was 2001 when Butler, whose métier is biography, accidentally uncovered the never-before-seen WWII correspondences between Franklin D. Roosevelt and Joseph V. Stalin. Butler was doing research on a different subject at the Franklin D. Roosevelt Presidential Library in Hyde Park, New York, when she realized the monumental significant importance of the numerous letters dating back to World War II exchanged by the President of the United States and the Premier of the Soviet Union.

“I knew these would make a great book,” says Butler. “These messages are history that isn’t known and I was instantly intrigued by how vital they are to our understanding of the relationship between America and Russia during WWII. They offer valuable insight on the brilliance of political play and complexities of war between two great minds and two great nations.”

Butler recalls, “The correspondence was extensive and often paraphrased to ensure secrecy. I set to work to find and reproduce the final version of all the messages Roosevelt wrote or approved and all of Stalin’s messages as read by Roosevelt.”

“My Dear Mr. Stalin” contains the more than 300 hot-war messages that were never before fully available in any language. They trace the progression of Roosevelt and Stalin’s personal relationship and demonstrate their concerns and statesmanship.

“My Dear Mr. Stalin: The Complete Correspondence of Franklin D. Roosevelt and Joseph V. Stalin” (January 10, 2006; Yale Press www.yalebooks.com; Hardcover; $35.00) is currently available at major bookstores. This absorbing book is edited with commentary by Susan Butler and a foreword by Arthur Schlesinger Jr., and allows the reader the chance to view history though the eyes of the men who controlled it and provides a first-hand look at the gravity of war.