Click here to learn more about East to the Dawn.

From the time I was editor of the newspaper at Bennington College, I have always loved journalism. For a while I wrote for The New York Times and Barron's. I was also looking for an American woman to write a biography about whom I felt had not been given her just due. From there it was an easy jump to Amelia Earhart. My mother was a pilot in the 1930s, when most people were still afraid to get in an airplane, so I had always known about Earhart, and admired her. She was that rare bird--an American woman who had achieved fame and fortune by virtue of her own natural talents. And the more I learned about her, the better she became.

East to the Dawn: The Life of Amelia Earhart 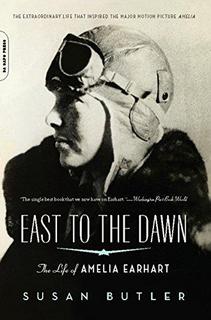 Amelia Earhart (1897-1937) captured the hearts of America after becoming the first woman to fly across the Atlantic in 1928. Nine years later, her disappearance on an around-the-world flight brought her extraordinary life to an abrupt and mysterious end.

Based on a decade of archival research through Earhart's letters, journals, and diaries, and drawing on interviews with the aviator's friends and relatives, East to the Dawn provides the most authoritative and richly textured account of both Earhart's record-setting aviation career and her personal life: her early years with her grandparents, her experiences as a nurse and social worker, her famous marriage to publisher George Putnam, and her secret affair with Gene Vidal, head of the Bureau of Air Commerce.

Butler's first book, East To The Dawn was used as the basis for the movie Amelia starring Hilary Swank.

"The single best book that we now have on Earhart's life."

"It's easy to see why this particular book, among so many other works about Earhart's life and legendary accomplishments, became source material for Hollywood."

"Of the dozen or so books (mostly wild fantasies) that I have read about Amelia Earhart, Susan Butler's is the only one which re-creates accurately that singular woman whom my father was in love with, as indeed was I, aged ten, when the lady vanished."

"The reader closes East to the Dawn with the lingering realization of how truly contemporary Amelia Earhart remains . . . her insistence on being her own person while fighting for causes larger than herself continues to command our respect and fuel our dreams."

"[An] expansive biography . . . . Rich with detail, "East to the Dawn" is an important book . . . certainly the most comprehensive Earhart biography in recent years. It stirs Earhart, who would have turned 100 this year, from the mists of myth, and finds the flesh-and-blood humanity within the alabaster icon."