Roosevelt and Stalin, Portrait of a Partnership 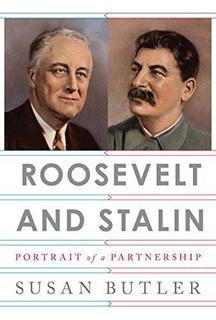 President Roosevelt and Marshal Stalin were more than allies of convenience in World War II, they were partners, and, sharing the same outlook for the postwar world, they became friends of a sort. Roosevelt and Stalin, Portrait of a Partnership reassesses the relationship of these two world leaders for the first time.

Two elements have combined to prevent a prior reassessment of their relationship. First, the crimes Stalin committed against his own people have obscured his critical contribution to the war, and to the peace. Second, Churchill's account of World War II downgraded Stalin's role, and his relationship to Roosevelt. Churchill was the master historian of the age, but he wrote history not as it happened but as how he wanted it to be seen. "History will be kind to me," he said to an associate during the war, "for I intend to write it."

A hugely important book that solely and fully explores for the first time the complex partnership during World War II between FDR and Stalin, by the editor of My Dear Mr. Stalin: The Complete Correspondence of Franklin D. Roosevelt and Joseph V. Stalin ("History owes a debt to Susan Butler for the collection and annotation of these exchanges"—Arthur Schlesinger, Jr).

Making use of previously classified materials from the Russian State Archive of Social and Political History, and the Archive of the Foreign Policy of the Russian Federation, as well as the Franklin D. Roosevelt Library and three hundred hot war messages between Roosevelt and Stalin, Butler tells the story of how the leader of the capitalist world and the leader of the Communist world became more than allies of convenience during World War II. Butler reassess in-depth how the two men became partners, how they shared the same outlook for the postwar world, and how they formed an uneasy but deep friendship, shaping the world's political stage from the war to the decades leading up to and into the new century.

Roosevelt and Stalin tells of the first face-to-face meetings of the two leaders over four days in December 1943 at Tehran, in which the Allies focused on the next phases of the war against the Axis Powers in Europe and Asia; of Stalin's agreement to launch another major offensive on the Eastern Front; and of his agreement to declare war against Japan following the Allied victory over Germany.

Butler writes of the weeklong meeting at Yalta in February of 1945, two months before Roosevelt's death, where the unconditional surrender of Nazi Germany was agreed on and postwar Europe was reorganized, and where Stalin agreed to participate in Roosevelt's vision of the United Nations.

The book makes clear that Roosevelt worked hard to win Stalin over, pursuing the Russian leader, always holding out the promise that Roosevelt's own ideas were the best bet for the future peace and security of Russia; however, Stalin was not at all sure that Roosevelt's concept of a world organization, even with police powers, would be enough to keep Germany from starting a third world war, but we see how Stalin's view of Roosevelt evolved, how he began to see FDR as the key to a peaceful world.

Butler's book is the first to show how FDR pushed Stalin to reinstate religion in the Soviet Union, which he did in 1943; how J. Edgar Hoover derailed the U.S.-planned establishment of an OSS intelligence mission in Moscow and a Soviet counterpart in America before the 1944 election; and that Roosevelt had wanted to involve Stalin in the testing of the atomic bomb at Alamogardo, New Mexico.

We see how Roosevelt's death deeply affected Stalin. Averell Harriman, American ambassador to the Soviet Union, reported that the Russian premier was "more disturbed than I had ever seen him," and said to Harriman, "President Roosevelt has died but his cause must live on. We shall support President Truman with all our forces and all our will." And the author explores how Churchill's—and Truman's—mutual mistrust and provocation of Stalin resulted in the Cold War.

A fascinating, revelatory portrait of this crucial, world-changing partnership.

"More exciting than a million calls to order . . . Susan Butler is the perfect historian to explore the connections between the two men."

"An ambitious new portrait of the partnership that saved the world from Nazi tyranny. . . . A powerful book; an irresistible read."

". . . brilliantly readable. . . . It is at once a long overdue tribute to FDR and his vision, and a serious work of history that reads like a novel. I would rank it next to Margaret MacMillan's Paris 1919. . . [The book] casts new light on the character and war aims of Stalin, Churchill and FDR himself. Brava!"

–-Michael Korda, author of Hero, Ike and Clouds of Glory

"Franklin Roosevelt's relationship with Joseph Stalin has been well plumbed by historians, but Butler brings intimacy and texture to the topic . . . few will deny the pleasure her book provides."

"Butler effectively demonstrates that there was no greater mediator and champion of peace than Roosevelt, whose sudden death in the final months of WWII robbed the world of perhaps the man who could have averted the Cold War."

"The most detailed account available of the relationship between these two extraordinary men. . . . [Susan Butler's book] answers the question, as definitively as counterfactuals can be answered, of just how much of a difference Roosevelt's death made. . . . An essential recounting of how the initial alliance between Stalin and FDR and its subsequent dissolution under Truman shaped the post-war world and our own."

"Well-written, richly detailed, and well-considered.  A significant narrative of a historically critical relationship and possibly, a lost opportunity to head off the arms race and the Cold War."

"A rigorous study of one of the 20th century's unlikeliest alliances. Throughout her excellent book, Butler shows how the leaders of the capitalist and communist worlds had not a grudging marriage of convenience but a willing friendship, one founded on and motivated by a shared vision: to defeat Hitler and create a lasting post-war peace. . . . Her attention to detail . . . keeps us gripped. . . . The result is a rewarding read about a meeting of disparate minds."

"The most complete study to date of FDR's relationship with Stalin."